Trend Following: My Capitulation to the Evidence

I’ve always prided myself on being an evidence-based investment advisor. Don’t try to persuade me with a good story. I want a reasonable hypothesis, backed by data and rigorous statistical analysis. I want transparent, peer-reviewed research that’s gone through the ringer of other academics and investment practitioners, who, in turn, bring their own data and statistical analysis to either support or counter your research. I then want proof that what works on paper works in the real world.

I’ve also always said that I would follow the evidence where it leads and not let my own prejudices (my own stories, if you will) cloud my judgement.

Little did I know that my commitment to following the evidence would force me to question my most cherished belief: You can’t time the market.

For nearly 20 years, I’ve preached with an almost zealot-like fervor to anyone who would listen that market timing is a fool’s game. You can’t do it so don’t try. I was comfortable in that belief because the data backed me up. Year after year, the data showed that buy-and-hold investors using index funds outperformed active investors. Sure, a few lucky investors and maybe even a few skilled ones could time the market, but since we couldn’t identify the lucky from the skilled, it was pointless to try. There was never a set of rules – a system – that could be tested and evaluated, so case closed.

Trend following is exactly that, you follow the trend. While there are thousands of ways to implement this strategy, it boils down to betting on assets that have been trending up in price and getting out of assets that are trending down in price. (You can also bet against down-trending assets if you want to try and profit off of their decline.)

The chart below shows a trend line for the S&P 500 index performance from mid-2006 to 2010. The first red box shows where the S&P’s trend begins moving down while the second bubble shows when the S&P begins trending back up. 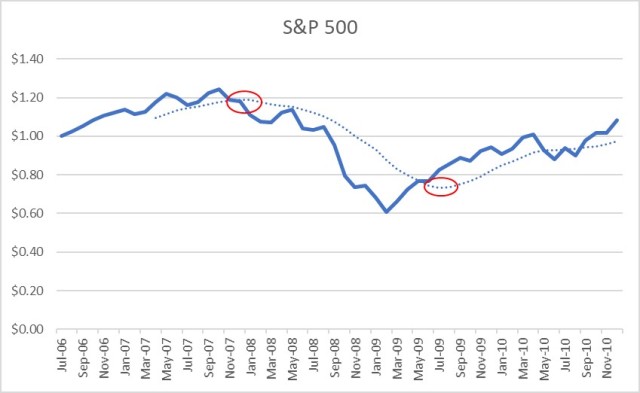 For Illustration Purposes Only

Now, you can see why trend following would cause a diehard buy-and-hold investor such as myself all kinds of heartache. First, it’s laughably simple. Nothing this simple could work, right. Second, it looks a lot like market timing. And we all know that market timing doesn’t work.

The problem was that the research from multiple well-known academics and investment practitioners was showing that this strategy, in fact, has been remarkably effective at achieving similar returns as buy-and-hold but at much less risk. Annoyed, but intrigued, I did some of my own research.

What did I find? The same results.

Using PortfolioVisualizer, I compared the performance of the S&P 500 index using a 10-month moving average trend screen against a buy-and-hold strategy from 1971 to 2017.

The results are hypothetical results and are NOT an indicator of future results and do NOT represent returns that any investor actually attained. Indexes are unmanaged, do not reflect management or trading fees, and one cannot invest directly in an index.

I ran the same test on international stocks, small stocks, value stocks, etc. The results were similar. A trend screen gave you similar returns but at much less risk.

As much as I didn’t like the whole concept of trend following, I was finding it very hard to reject the evidence. On the other hand, I couldn’t shake the feeling that when something sounds too good to be true, it’s not.

Mark Helm is a Certified Financial Planner and Enrolled Agent. He is the founder of Helm Financial Advisors, LLC, a fee-only financial planning firm dedicated to helping people reach their life goals.
View all posts by Mark Helm, CFP, EA →
This entry was posted in Uncategorized. Bookmark the permalink.

1 Response to Trend Following: My Capitulation to the Evidence